In my other home, the dining room is dominated by a large square wooden table that I have had with me for over 30 years. Around this table, hundreds and hundreds of lesbians have planned their books, tapes, protests, love affairs. On this site, the dining room will be a place to discuss all kinds of nourishing wonders like books and music and food. And please check out my fridge for coming events offline. 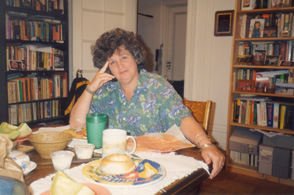 What I have been reading at my table...

Girl in Movement: A Memoir by Eva Kollisch

This $16.95 paperback is not currently available from online booksellers, but I encourage you to ask your local bookstore or library to obtain copies, or you could order it directly from the publisher:

Here are excerpts from my review entitled “The Life of the Party,” published in the January 2001 issue of The Women’s Review of Books:

In this subtle narrative, Eva Kollisch details four years of her life, from 1941 to 1945. As a fourteen-year-old Austrian Jewish refugee newly come to New York, she found hope in the revolutionary socialist visions of the Workers Party.... During these years, she leaves her family home in Staten Island, has her first sexual experiences, travels the country in the service of the Party, marries an early political mentor and tests many friendships....

In the 1980s, Kollisch drafted the story as a novel, but was not satisfied with the outcome. Discouraged, she put the manuscript aside for ten years. When I asked her what prompted its resurrection, she answered, “After I stopped teaching, when I had more time to concentrate on my own work, to confront my own history, I felt a longing to claim this story as my own, in a first-person voice, so I looked at the manuscript again, revised it considerably and fully claimed this young girl by writing her story as a memoir. I cut out inventions, diminished artifice. I wanted to claim all the traumas of my childhood, to connect this early time of radicalism to my later involvement in the peace movement, in the struggle for the liberation of women and lesbians and gay men. I did not want this time to vanish, this time of displaced peoples.” ...

I have heard Eva Kollisch’s voice at dinner tables and at public meetings. But the voice I find in this memoir is a new one, a voice contained by haunting events and inflected by persistent loyalties. When I sat down to write this review, I realized what had touched me the most about Girl in Movement was the victory of it — the surviving tenderness, courage and yearning of a young woman who had been sent into exile by the hatred of a maddened state, the marvel of her youthful, and continuing, commitment to social justice, and her search for more complex visions of freedom. Eva Kollisch could have been swept away by history; instead she turned to grapple with it.


This diary of the days of the NATO bombing started out as e-mail letters from a feminist journalist to friends in Sweden. It was just released this month from Midnight Editions, a new imprint of Cleis Press. It is a very powerful portrait of what happens under such a complex siege.

One of the things I want to share with you at my table is what cultural works have recently proved themselves very important to me. The two I want to start with are King Leopold’s Ghost: A Story of Greed, Terror and Heroism in Colonial Africa by Adam Hochschild (New York: Houghton Mifflin, 1998) and We Wish to Inform You that Tomorrow We Will Be Killed with Our Families: Stories from Rwanda by Philip Gourevitch (New York: Farrar, Straus and Giroux, 1998) I am trying to understand the historical roots of genocide, the lineage of racism and colonialism and the way a writer possesses these histories, the way a writer can force a story into being so we cannot avoid these catastrophic events. As a lesbian and as a Jew, I find moments of connection both to the abuses of power and the forces of resistance.

In King Leopold, we meet Roger Casement, an Irish separatist and anti-colonial reporter who made the world aware of Belgium’s “barbarous cruelties,” a gay man who is hanged in 1916 for his political activities. His last public words are:


Self-government is our right. A thing born in us at birth; a thing no more to be doled out to us or withheld from by another people than the right to life itself—than the right to feel the sun or smell the flowers or to love our kind... where men must beg with bated breath for leave to subsist in their own land, to think their own thoughts, to sing their own songs, to garner the fruits of their own labors... then surely it is braver, a saner and a truer thing, to be a rebel... than tamely to accept it as the natural lot of men.

Philip Gourevitch dedicates his presentation of the stories of the genocide of the Tutsis of Rwanda to his parents who are Holocaust survivors. Here, I think, is another way to honor Jewish dead, by giving voice to the suffering of others, by exposing and preserving the records of national hatreds.


Rwandans often speak of a million deaths, and they may be right. The dead of Rwanda accumulated at nearly three times the rate of Jewish dead during the Holocaust. It was the most efficient mass killing since the atomic bombing of Hiroshima and Nagasaki.
(Gourevitch, 1)

Casement on his way to the Congo kept a diary of his sexual encounters.

All of this, is what I hunger to make sense of.

I refer to works of Charles Dickens in the River Diaries I write in the Garden.

Messages for Joan? Problems with this site?
Please contact the WebMs.